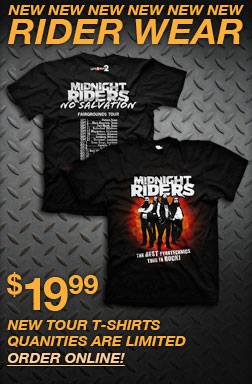 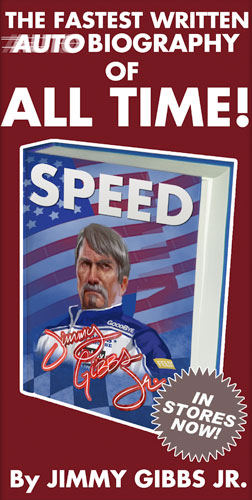 You might’ve heard about a lot of bands cancelling their tours this week because of all the airports shutting down and the government telling people to stay indoors. To that the Riders say: We’ll stop touring when we stop breathing. What America needs most right now in its time of trial is MUSIC, and that is one thing the Riders are proud to provide.

The airports shutting down don’t confront us none. We don’t tour in a fancy plane (just the ol’ dependable Riders tour bus, and I could tell y’all some stories of what we’ve gotten up to there over the years). And with the No Salvation Tour only halfway done, we’re not about to let all our fans down who laid down their hard-earned dollars for tickets (and who might wanna buy our new album besides).

Next tour stop’s Griffin, Georgia, at the good old Peach Pit Arena at Whispering Oaks Fairgrounds. We’ve played there before and it’s one of our favorite all-time tour stops. You Georgians know how to rock! We’ll see you there, Green Flu or no Green Flu. You just bring your own badass self and your old lady, and let the Riders take care of the rest.

Today of course marks the anniversary of the tragic death of Riggs Donner, the late great Riders bass player I replaced. 24 years ago today, Riggs put on his motorcycle helmet, hopped on his hog, changed his mind about the helmet and took it off again, then headed out to Sugar Bares, his favorite local strip club. He never made it. Why he took that helmet off is anyone’s guess—Ox says he was always complaining it chafed—but one thing none of us have to guess at what happened next. That eighteen-wheeler dragged poor Riggs the better part of a mile. Miraculously, his skull was the only part of his skeleton not damaged in the accident—you can read whatever you like into that.

Now sure, you could make the case that yer old pal Jake's been in the band five times as long as the great Riggs. You could also make the case that yer old pal Jake's appeared on all of the important albums the Riders've ever made, that he wrote the band’s only number one hit, and that the great Riggs was constantly drunk and barely ever played his own instrument in the studio, and live they turned his amp off and had a roadie play his stuff behind the scenes. but still: Riggs Donner was a Bass Legend. And let me tell you, the other Riders'll never let me forget how impossible it's gonna be to follow in his boots.

So raise your glasses, brothers and sisters, to the late, great, Riggs Donner. Maybe someday I'll be honored enough to be considered his official replacement, and get the full one-fourth of the royalties on all the songs I helped write instead of half my share going to his widow. But until that day, let's give it up for Riggs. He played on the first Riders album (officially) and that is the only album he’s appeared on, but as the guys are always so keen on telling me, he left some pretty big boots to fill.

All you ticketholders in Baton Rouge, Louisiana are in for a treat at the show tonight—the boys’ve put together a concert tribute for Riggs, with his son, Thad Donner, taking over the bass duties. So yer old buddy Jake’ll be manning the merchandise booth tonight, signing t-shirts, CDs, and anything else all the ladies out there might want signed. (Fellas: only signed t-shirts and CDs, please.)

So I’m sure y’all have heard by now that yer ol’ pal Dusty said a few controversial things at the Waynesboro, Oklahoma show last night, coming down pretty hard against cancer research. I just wanna say that we totally support our pal, even though officially the Midnight Riders do not endorse any of the opinions voiced by Dusty last night, nor condone his actions afterwards, when a journalist asked him why he loved cancer and Dusty knifed him between the ribs.

Luckily, the journalist is expected to recover fully – thanks to Dwayne Thompson from Amarillo, Texas, who won our website contest and gets to donate a lung in exchange for the FULL MIDNIGHT RIDERS DISCOGRAPHY on CD, autographed. You are the king, Dwayne.

Once again, we fully support Dusty while simultaneously not endorsing anything he says.

To all you diehard Midnighters out there in Florence, Arkansas, we’ll see you tonight at the Florence Civic Center and Flea Market.

Hey there, brothers. Apparently Ox found my laptop and decided to have a little fun. Then he found my book of Renaissance art and pasted on pages of pornography from Mounds Magazine.

The guys sure do bust my hump that I wrote ‘This Man Loves You’. You might remember the song—it’s the one that became a number one hit. Oh, that’s right. It’s the only Riders song to become a number one hit. You probably recognize it from a bunch of car ads a while back. We made a pretty respectable pile of coin off that song. That song they’re always criticizing.

Here’s a fact about ‘This Man Loves You’ you Midnighters might not have known: I wrote it to my father after he passed on. That Ox sure is a card, let me tell you. One of these days someone’s gonna break a tooth off in that big funny mouth of his.

I rite ballads hahahaaaa this man loves you

Every time i look at my stupid art books i cry

Long night, brothers. The life of the road. 3am and we’re on our way to Fort Worth, Texas (a town with some history for the Riders) for another kick-ass show. I’m writing to you from my laptop on the Riders tour bus. Things are pretty chill here. Dusty’s practicin’ some licks. Smitty’s playin’ some Xbox, unwinding. And Ox is drinking an entire bottle of scotch whiskey and hurling insults at me. So it’s just another day in the life, brothers.

Hold on. Ox says he wants to type something at all you Riders fans out there. Take it away, Ox:

According to Ox I can’t delete that or I’m kicked out of the band. We’ll see you in Fort Worth, Midnighters.

A lot of you’ve been emailing your ol’ pal Jake about where to find High Heels and Brushed Steel, our new greatest hits album (with two awesome new bonus tracks).

Well, I can tell you where you won’t find it—in stores. According to the bullshit bean counters, there’s only so much shelf space, and the last Riders album “underperformed” (not in quality, brother, that’s all I have to say). The Powers That Be have decided a new album from the Midnight goddamn Riders won’t sell as much as some auto-tuned bimbo singing about her feelings. So guess who gets shown the door? Not the bimbo.

You heard right, folks: The Midnight Riders got dropped from our label. And our take on that is: Good riddance to bad bullshit. Who needs ‘em? The Riders have never been about the corporate game anyway. The Riders are about the road, brother—connecting with fans, setting off fireworks, and delivering the best goddamn live show in the business.

So all you diehard Midnighters out there eager to get your hands on High Heels and Brushed Steel, rest easy. Cause you’ll be able to buy it from the Riders themselves on our No Salvation fairgrounds tour this fall! We’re taking the album with us and selling it on tour. If you’re looking for the absolute greatest greatest hits album $25 can buy, and you wanna give a big “Screw you” to the record company bigwigs besides, we’ll see you on tour, cause the Riders are Ridin’ Out.